Woke early again. The balcony door was open and I could hear the feint hiss of rain. I got out of bed and had a peak and the cloud was so low, I couldn’t see the mountain down the valley, water everywhere. Bollocks! This wasn’t the forecast. It was supposed to be partly cloudy and about 20 degs. Resigned to hoping it clears up quick like it can in the mountains, I got back into bed and popped the TV on and watched breakfast TV for a bit but that just gets boring as its repeated every 30 mins or so.

I kept checking the weather and the rain had stopped but there was still low cloud. It was brightening up slowly so I had some breakfast and a coffee and just stared out the window. C’mon weather! The sun broke over the mountain and it was looking better. I hoped the sun would burn the cloud off but I was still a bit concerned about the possible damp roads I may encounter. I got changed and was pacing the room, checking and double checking my kit. On the balcony the air was cool, so I took a jacket with me this time for the descents, At about 10am I made the decision to go, the sun was out, bit of cloud in the valley but I banked on it evaporating by the time I got to it.

Today’s ride was simple. Bag the last three climbs of my ‘set’ and surpass my 10,000m target for the week.

My first climb was the Col de L’Encranaz, the tough side from Morzine. Shorter but a lot steeper. I left Les Gets and dropped down the valley and man it was cool. Just enough for you to wish you had arm warmers on. My legs felt ok, no soreness. After all the climbing this week, I didn’t know how my legs were going to be but I was going to do this ride on one leg if I had too. I reached the foot of the climb, a left then it kicks up 8 and 9% straight out of the gate. Its a short climb, the KM markers told me 6km. I got in a decent gear and settled in. The hot sun had arrived just in time to bake me all the way up. No need for the jacket then! A km in and my legs felt superb. I was pushing harder and in a bigger gear than I had been all week for the gradient. Nothing silly, I just rode tempo and saw 4 riders ahead and I was closing in on them fast. Two couples. I reached them, they were English. We joked about how long it takes to do a couple of KM and I pushed on, just feelling stronger and stronger. The last km or so grinds up the side of the mountain and then eases a 100m or so from the top. Despite having the km markers there is no similar summit sign on this one, so I just found one by the car park. Zip up, helmet done up and glasses on, I started the descent which is a bit bumpy but easy enough with a small incline midway. It eventually comes out on the Col de la Ramaz with about 9km to go. 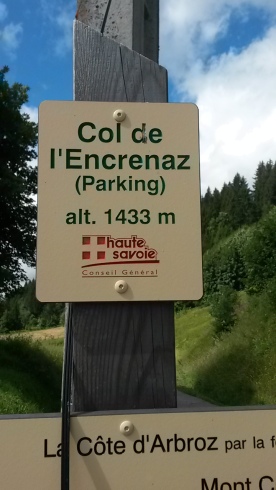 From this side, the next 4 km of the Col de la Ramaz are pretty brutal. Consistently between 9 and 12%, its pretty relentless but the road surface is superb. Looking back down when you do each hairpin, its scary how much height you ascend in such a short time. Hairpins done, the road eventually reaches Pras de Lys, a ski resort on like a gently rolling plateau. This meant the next couple of km were a nice 4% average with a steeper kick upto the top of the resort before the last km stinker at 8%. Again no summit sign, so I stopped and took a pic of the KM line from the Tour. It looks like their building a man made lake right on the top. Big hole, lining down, covered in gravel. The first 3km of the descent to Sommand of the top is a lovely gentle jaunt around the Sommand plateau. It was joy to be able to open the taps after the pain I was in going the other way just a few days ago. I considered stopping for a photo but it was cold so I carried. Just round the corner is the Sommand Tunnell which took my breath away it was that cold. The next couple of km are very steep until the road opens up and winds down the open hillside. Plenty of riders were tackling it the other way but, confidence levels maxed out and my legs feeling awesome, I was drifting all over the road and sprinting out of the hairpins when I had good vision of the road. The warmth of the valley began to take the chill out of my arms and I eventually hit the bottom in Mieussy where left towards Taninges.

This road was a bit busier been the main valley road but still nothing like Stourbridge on a Monday morning. There was a headwind and I just rode a decent pace. One climb left and I needed something left. It was hot in the valley and again I was glad of that breeze taking the edge of the baking heat. I approached Taninges and my route was the ascent of the best descent I’d done all week. Its actually the first 6km of the Ramaz I’d just climbed which completed my set. No more to do round here after this one.

Left off the main road and it kicks up at a nice 6% with a few hairpins. The heat is on. Even the tarmac is bright like its been bleached. After the first couple of hairpins I glanced a rider ahead! Great, a carrot. I rounded the next hairpin and I could see a fair few hundred metres ahead and he had gone. I was convinced he must have turned into a house  so I carried on as the road wound up the valley and then there he was again, now in striking distance. I couldn’t work out why I hadn’t seen him sooner but I just stuck at it and he was getting nearer. I was within 50m of him, the gradient eased a touch and he accelerated away. WTF! Now, he was a tasty rider and I was biting off more than I could chew or my instincts told me maybe he sensed he was been caught and was pushing on. I couldn’t go any faster, I was in my zone. That zone when you hurt but its comfortable. Breathing hard but controlled. I stuck to my guns convinced he’s crack but he kept going until the gradient eased again, so I banged it in my big ring and put in a big acceleration. Caught him, said hello and went past him like he was still. He quickly disappeared and it left me thinking what an odd way to ride a climb. I topped out and joined the main road back to Les Gets now, almost home.

I started to push hard now and I looked down and saw I was 3 gears higher than I’d rode this road before. I couldn’t hurt myself and I was feeling a bit short changed now. I shouldn’t feel this good after doing all that so on impulse I decided to end the ride with another ascent of Mont Chery. Finish my week how I started.

I rounded the island and popped it into 1st gear and twiddled the first couple of km, I needed everything for the steep section. Legs were good, with 2.5km to go it gets serious and the twiddle became a grind then boom! Its so steep, I was sat back on my saddle pushing so hard in 1st gear my front wheel was coming off the road. Its so brutal, I was all over the bike. I saw the top of the steepest section and just fixed on getting there, the rest was easy. I twiddled the last few hundred metred and I was done. All my climbing done for the week. My OCD made me ride over the Dauphine Prologue finish line which a bit past the summit sign. I quick selfie and shot of Les Gets below and I descended back to the hotel. 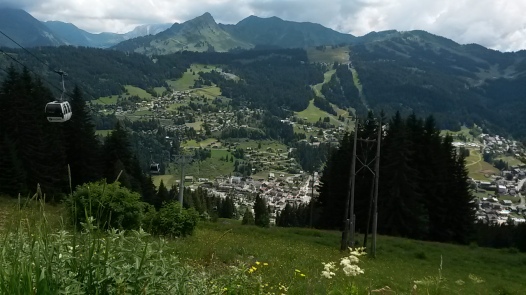 I was going to treat myself to lunch out but I remembered I bought ham yesterday so I rode around town trying to find some bread. Bread back in the room, I downloaded my ride to see a couple of interesting facts. 1. My descent of Mont Chery gained me 8th overall on Strava with the same time as French Tour rider Thibaut Pinot! and 2. I was 90 secs faster than my attempt a week ago proof how much confidence I have gained descending this week.

Ham baguetted out, I popped out for a coke and some water. Coke’s are sold in 500ml cans here! I sat down in the sun and watched the kids playing on the pump track in the village centre then came back for a chill to write this and have a snooze before my slap up dinner treat as its my last night. Two beers and red wine to drink up too!