So people….thought I’d write a quick blog explaining why ALL of my bikes have 46T outer rings. I’ve changed them all and been running them for a few years now. Here’s my logic and explanation why I do.

Having a 46T outer is not an original idea. Arguably quite common on cross bikes with double setups although 1x setups are getting really popular now which adds weight to my argument anyway. More about that in a bit. I think pro cross riders use a 46 or 48 if they run a double setup but on the road its a different ball game.

Compact 50-34 chainsets are the most common ring sizes on road bikes. The idea to change my 50’s to 46 came when I had my shop and one of the guys who rode with us had changed his race bike to a 1x setup and had gone with a 46. I was quite interested in this because at the time I thought it was a bit out there, kind of unique and looking back now, a bit ahead of its time. To run a 1x setup he needed a front ring and rear cassette combination which was going to give him a big gear to race on and a small gear to climb successfully with in the space of 11 sprockets. He had calculated a 46 or a 48 was best for him. But he was tiny so, arguably, didn’t need such a small gear on the back. This resonated with me a bit and I turned on nerd mode and began to do my own research and calculations.

Here is some basic maths so bear with me … (calculations courtesy of BikeCalc.com)

So the bottom line is a 46 uses more of my sprockets, I keep my highest gear, I still have my lowest gear but my  front changes are massively reduced. For me thats a real benefit. To put it in some kind of perspective. On the Mad March Hare Sportive, I realistically would only use my front mech 3 or 4 times to go down and back up onto the big ring twice (2 steep hills). If I ran a 50 or my usual 53, it would be a lot more.

If you are interested in this idea but perhaps bigger than me or less-fit, consider a smaller ring like a 44 or 42T even.

This works for me but won’t be everyone’s cup of tea I know. If you already run a 1x setup its irrelevant. Just wanted to tell you why I do it to get the best out a double. 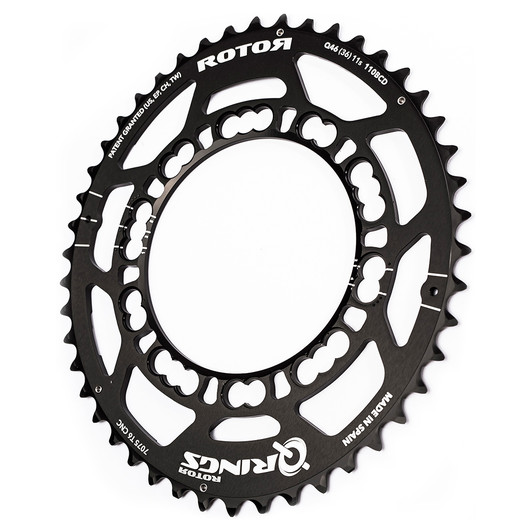