Anyway. Its my 3rd year in a row on holiday in Corralejo, Fuerteventura. I’m a roadie so the last two years I’ve hired a road bike. Despite cycling being popular on the island and having plenty of infrastructure around Corralejo for cyclists, riding to and from the place is a bit of a problem. There are literally two main roads in and out. One is the coast road through the beautiful dunes. The other is a very, very busy A road which is literally in the process of been converted into a motorway to bypass the dunes. Horrible. So the options for a roadie are pretty limited. 15 miles down the dune road before you get a choice of where else to go. 15 miles back and your into 90 mins of riding the same road every day. Road cycling is more popular inland and down the south of the Island where there are more climbs and its a bit greener. By far the most popular form of cycling on the island is mountain biking which offers a bit more variety around Corralejo, so this year I have hired a 29er hardtail. Nothing flash, just a Specialized Rockhopper so I can go and explore a bit and get away from the traffic and people.

I picked up the bike today and planned a go up the Volcano Bayuyo that overlooks the town. I found a path up it but it looked steep even on Google maps and it was 50/50 whether I’d be able to do it.

In bright sunshine and about 25 degs I set off on the road that goes around the town like a bypass but is actually used to access the ferry port at the end of the road where I am staying. It keeps the traffic out of the centre. After some stops to adjust my saddle height I made it to the gravel road that is actually a road open to vehicles but is gravel. These roads are all over the island. It has some short, sharp rises and begins to navigate around the back of the Volcano where to the left if you look up you can see the path snake up the edge of the crater. My first thought was ‘No Chance’ as I looked up and saw some hikers climbing it like steps. It looked impossible to ride so I just carried on the gravel road which circumnavigates the base of a couple of craters.

The bike itself is ok. I’m not used to the position. The bike is heavy and its hard going on 2.3 tyres but it has a triple so I have plenty of gears. The bars are a bit wide for my narrow shoulders so I tended to hold the shifters rather than the grips which was fine.

The views are pretty cool. Its a very desolate island. Its like a scene off Mars if you look one way and then a you see beautiful blue sea and waves breaking onto the coastline if you look the other way.

As I rounded the back of the volcanoes my planned route was cordoned off with a ‘No Entry’ sign. That route was a bit of a shortcut to Lajares. I knew it because we did an offroad buggy expedition the same way last year. There was no other way other than to carry on but after a few hundred metres I found a sign which pointed me back to where I wanted to go. It was a bit further but I was back on track. I stopped for a quick photo. 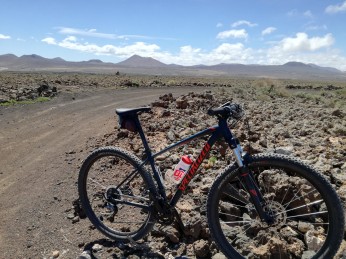 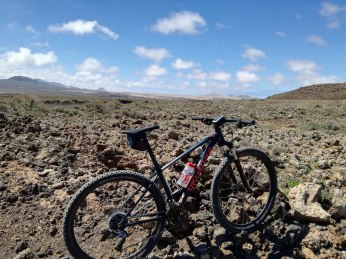 This track was pretty rough. Unfortunately my forks were shit. Coil springs are just too hard for my 65kg frame. I needed a nice soft plush air fork really. After a couple of km, I entered the outskirts of Lajares and passed some very nice homes. All very random out here. No souless housing estates we build in the UK. Just random plots of land, grabbed, bought and built on.

I eventually reached tarmac and turned right towards the Nort coast and Manjanicho. My arms needed a rest to be honest. This is a very straight road to literally nowhere. Its a weird place. A resort that is eerily quiet almost deserted. The tarmac ends and the gravel coast road appears where I take a right and head back towards Corralejo. Just along here I stopped. It was rammed with surfers and their campervans.

A bit further on there is a beautiful lagoon. What a place to escape to. 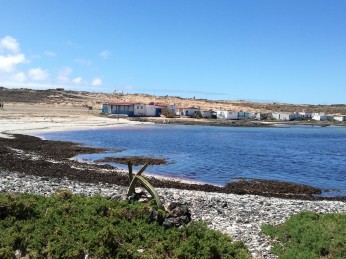 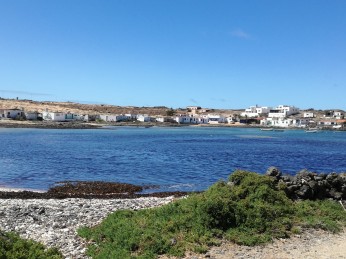 I carried on back along the coast. All the vehicles had churned up the gravel track into a ribbed-like surface so the vibration was terrible because my forks were shit. I had to pick my lines on the edges as much as possible. Its an awesome view though. I stoopped again just before the end to get another pic of some waves crashing up onto the volcanic rock laden beach with Lanzarote in view too

Back in Corralejo I did a loop around and through the town to round out 90 mins of riding. I’ve been Zwifting a lot lately so my puny arms got a bit of a kicking. I’d forgotten how hard mountain biking is but great fun despite the bike’s shortcomings. So more to come in the next few days while I have the bike.

Off for a beer now. Thanks for reading 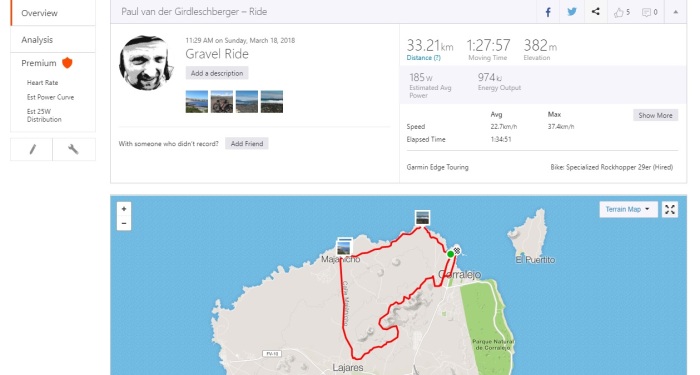 View my ride on Strava