One of my shortest ever Zwift races and a first to the top of the Volcano. Been a while since I’ve been in there too.

It was a last minute decision to race. Originally I was going to to do the WBR Watopia Flat Reverse 2 lapper 30 mins earlier but a PC crash and a necessary reload of my AV software meant I missed that so I opted for this one instead.

A reasonable size group peleton started with a quick selection made with the leaders in a group of a round a dozen by the time we exited the tunnel. Team mate Tom Mansfield was in there too contributing. There were a few digs through the S bends to the Italian Villas which I closed down and then I gave it some beans over the cobbles and onto the dirt which split the group briefly.

There were no splits through the Volcano but the hammer went down the climb. I pushed a bit and with a kilometre to go I opened the taps before easing and going again with 300m to go with my power-up engaged. I thought I had it with 100m but I was pipped on the line!

Tom missed the jump with 300m to go but finished a great 5th a couple of secs behind the winner. Great race. I quite liked that format

Update: I was subsequently upgraded to 1st on ZwiftPower.com 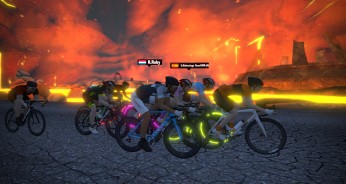 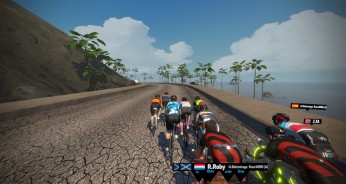