Weird this one. I raced last night so I was tired riding to work this morning. That is normal and expected. I rode home and I was still tired. Normal again. I decided to do a short race tonight as I’m out tomorrow night when I’d normally do my 2nd race or a longer ride home. I’ve got Friday off the bike so a bit of overload is fine.

I haven’t ridden the Lady Liberty course yet but a bit of research told me it goes up and up so I expected to see some roads up in the air above Central Park on this one.

I got home with 10 mins to spare so I left my tights on to keep warm. I quickly setup my feed with a few mins to go. The start was fast as expected. Not too many riders but a decent group hit the climb which is a series of ramps which ramp up and curl round. The gradient tops out around 15% but there are a few 10% steps to deal with. I hit them reasonably hard and found myself going away early on so I kept going and the gap grew and grew. I had no idea how long the climb was so I measured my effort a bit until I could see the KOM arch. I had about a minute lead over the top with around 8km to go so I just smashed it home. The descent seemed short in comparison to the climb and the ride back is a longish power drag. I just kept my numbers up without blowing too much and by the end I’d built up a lead over around 1 min 20secs to take the win. 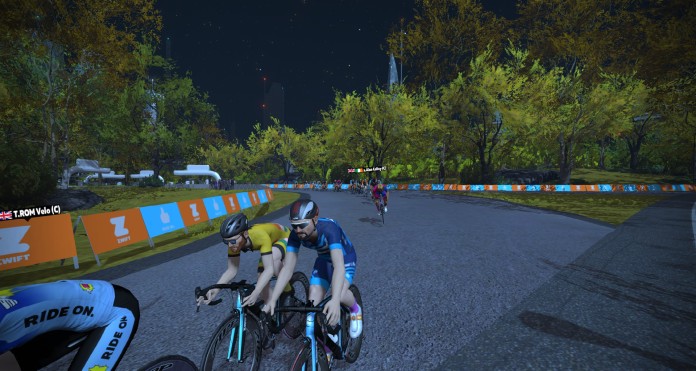