It was unclear how I’d feel on this one. I’d binned the idea of a race after work last night. I’d ridden home and got soaked so I planned on a race this morning depending on how I felt.

I’d slept well fuelled by a bottle of wine but my legs felt heavy after a week of commuting. I scanned ZP for a race and found this one. A bit longer than I wanted but it was the right time, finishing just before lunch!

Stream setup, the pen was busy with 160 odd riders lined up. The start wasn’t as full on a normal but the split happened and I was in the lead group as we entered the tunnel. Essentially the A’s and B’s. A rider gave it some beans on the ramp as we exited which strung us out and was the first real test of my legs and despite that ache of fatigue they felt good. The group came back together but the overall tempo remained high as no one was scared of doing a bit on the front. A big, sustained attack from a chinese rider on the climb into the Volcano properly split the group. I managed to hang onto the coat tails and drag myself up to the front. The speed remained high  and the split held. As we started the 2nd lap we had 20+ secs on the chase group.

Second time into the tunnel, the pace eased a bit but it kicked off again on the ramp as we exited with riders attacking over and over and my speed and effort yo-yoing with plenty of yellow and red spikes on my graph. More attacks into the volcano again but the group were not letting anything stick this time.

Into Lap 3 and I was still feeling good and fancied it. Riders were still attacking with the biggest sticking for a couple of kilometres after the tunnel. I expected another attack into the volcano so I made an effort to stay in the wheels and it went but kept going through and out the otherside. 2km to go and it was lined out. I had a draft power-up left so with 800m in the wheels I engaged it and I wound up my gear and opened the taps. A bit early for me but I held it and rolled over the line for 7th.

Despite a week of commuting and a long race on Tuesday and heavy legs, I was happy with that in a hard, attacking race with some good A cats

..and thanks to Bryan P for the Ride on during the race! Cheers buddy. 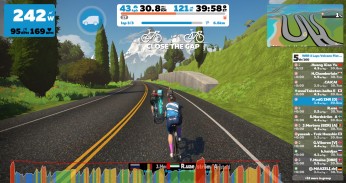 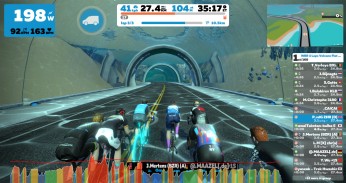 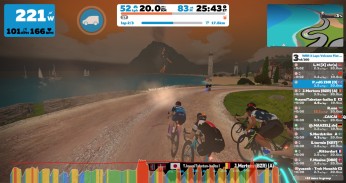 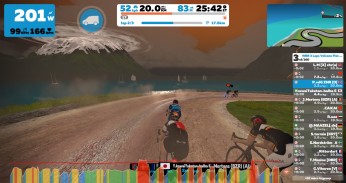 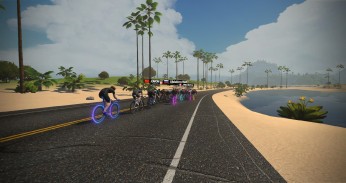