Half a day at work today and with the threat of overnight ice I decided not to ride in and opted for a Friday PM race instead. Its unusual as I never Zwift on a Friday as I’m normally wiped out from commuting all week.

For a PM race it was big field with 200+ riders. The start was very quick. Quicker and a much longer, sustained effort just to get to the front. 40+secs in and I was still going full bore into the tunnel before I was able to ease off a bit. Out of the tunnel and it was stretched again with some riders giving it full gas on the front. Another effort for me out of the tunnel and round the esses and although the power was there, that background ache of fatigue in my legs was telling.

Cold and windy commutes this week took their toll

I just tried to sit in and stay in the wheels near the front. Into the Volcano for the first time and it the group was stretched again with more popping off the back. At the end of Lap 1 there were about 30 or so riders in the front group. Lap 2 was slightly easier except a minor split I jumped across too out of the esses down to the Italian Village but it was soon mopped up from behind and was a wasted effort. At about half way and into the Volcano for the 2nd time my legs were aching. I told myself just hang on now. Lap 3 and the speed remained high. No attacks of any note but I did find my efforts out of the tunnel and through the esses, despite the achy legs, I was up there still. The Volcano was fine and the speed remained high straight into the finish. I drifted to the back of the group and as we turned into the final straight I engaged my draft power-up and wound it up but I just didn’t have the jump or the zip I needed to make any real ground up on the leaders. I passed a few riders but rolled in 19th over the line. 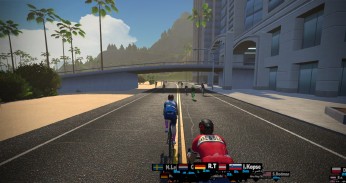 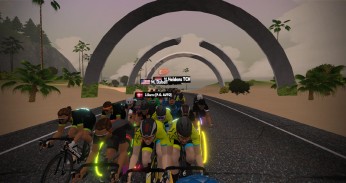