Day off today, so I fancied either a longish race or a long ride. I could have attempted a ride outside but the current icy weather makes the back roads a bit of a lottery so I stayed indoors on Zwift.

A quick scan of ZP when I woke up and I found the EVR Asia Race around NYC or a race on the Richmond Hilly course. I’d been out with friends for a meal last night and had done a 30 min effort beforehand so I was unsure how my legs were going to be given recent events so I opted for the KISS AT Base ride.

The ‘AT’ stands for Anaerobic Threshold

The ride was 6 laps + lead in around the Greater London route. Very flat but holding 3- 3.5w/kg for 90 mins+ is a test. If you have your graph element on the screen, the idea is to keep it in the blue and stay in the group. I think about 50 odd riders started. Steady start with a brief split until it all come together after a few km’s. For the next 6 laps I have to say it was one of the most disciplined and enjoyable group rides I’ve ever ridden. I don’t do them very often. No flyers. Everyone respected the Leaders’ orders to ease up etc and there was plenty of chat too about the World CX Champs this weekend. On the last lap the heat was turned up with a steady effort of 4-4.5w/kg and again I was impressed how it stayed together with only a few drifting off the back but no moans or groans. Riders took it in turns to push 5 & 6w/kg on the front so holding their wheels at just below that level was a good, hard last lap. The inevitable sprint came on The Mall with a storm of power-ups raining down and it was done. A quick (1h 47min) 75km done and in the bag! 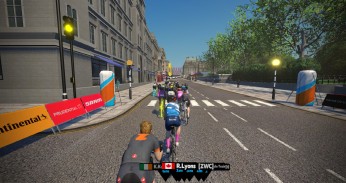 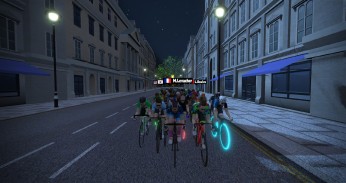