As we rolled into Saturday the weather gods had turned on the central heating. 9 degs when I got up at 7.15am. A quick glimpse outside confirmed my phone’s declaration it was relatively warm compared to recently. Kit choice was easy. No winter jacket needed. My Galibier long sleeve windproof jersey and my Galibier Gilet. Best bit of kit I have.

After my usual faff, I headed out at 7.55am loaded with breakfast to get to Cafe Morso, Alvechurch @ 8.10am. Coffee beckoned. I rolled up, parked the bike and attempted to enter. Door was locked. Hmmmm. Quick check on Google. Definitely opens @ 8am. Quick check of their Facebook page, opens @ 9am. FFS!! Embarrassingly, as the other guys rolled up I had to tell them no coffee. Anyway, after what had become a LONG wait standing outside I decided we roll just before 9am. There were 6 of us. Myself, Steve, Paul, Phil, Ryan and Gerard. A handy, experienced group who knew the drill.

The B ride started at 8.30am at Earlswood Garden Centre and were meeting us afterwards

We headed south towards Redditch. The southerly wind was a bit stiff. The roads were quiet as we dropped onto my commute route along the effectively car-free bus route. Its dead at the weekends and when the schools are off. Gritted well, its a great way to get through Redditch. At Washford Mill, we headed out through Studley and then Spernal to Great Alne, the wind beating us up a bit over the rollers past Purity Ale. Eventually we had some respite when we sped through Aston Cantlow but it was only shortlived before the drag that begins at Bearley and culminates at the top of Langley Hill. Just after we crossed the A3400 Stratford Rd, the Cult B ride met us coming the other way. They had started a bit earlier and taken the bulk of our route the opposite way. After a grovel up Langley we hit Claverdon and then took a right to Pinley Green but Gerard and Ryan took right a bit too literally and went off down the wrong lane. A quick regroup and we were soon enjoying a decent tailwind past Hatton Country World and back into the lanes to Haseley Knob. Through Honiley, I was on the front with Ryan and we were tapping out a good tempo as we continued onto Tempall Balsall. The roads were quiet everywhere today. I expected traffic on the Knowle Road but other than one close-pass it was fine. Back into the headwind though down Watery Lane as we cut across to Bakers Lane, Chessetts Wood Road to Rising Lane. A reminder of how much money there is around there. Massive houses. Back to Hockley Heath and School Road beckoned. The scene of so many fast finishes to Cult Rides in the past but the pace had been healthy and steady all day. No different here. By now I was remembering just how quiet the lanes are this side of the A435 compared to around Redditch and Bromsgrove. Such great roads to ride on. Steve and Gerard took one for the team, taking us up through Earlswood Lakes and onto Poolhead Lane into what had become a pretty stiff headwind. Thanks boys! We dropped past the old shop and eased slightly to have a glance. The shutters are still graffiti-ed up and I think its still a demolition firm in there now. I was getting hungry now but only 10km to go. I rode on the front with Gerard up the last climb of Watery Lane. Stu met us at the top and rolled back to Alvechurch with us, the last drag over the dual carriageway, into the wind, enough to seal it for most of us. 80km in the bag.

The B ride were in the Cafe. Tab open. We demolished a load of coffee and cake. A couple of us had a beer and Stu, fresh of nights and no breakfast, smashed a full english. Some of us had refills but we eventually decided we’d had enough and needed to make an effort and go home.

It was fantastic ride. My longest group ride for a while and it showed. I’m a bit rusty. I hit a couple of potholes and my back and neck were a bit more tired than they should have been. My Zwift legs were fine though.

I’d like to say a massive thank you to each and everyone that was ever involved in Cult Racing in some way. You played a part in a chapter in my life I will never forget and have left we with memories I will forever cherish. You will always be my friends.

….but its not quite over yet. We still have money (approx £100) which I will take charity nominations for shortly and I have some kit which I’ll post an inventory for. It’ll be dirt cheap to clear if anyone wants some. Keep an eye on the Cult facebook page.

Its been a pleasure…. 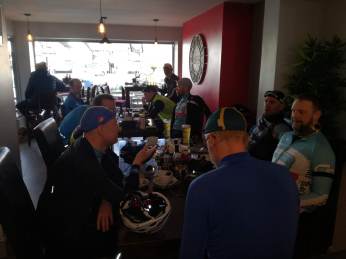 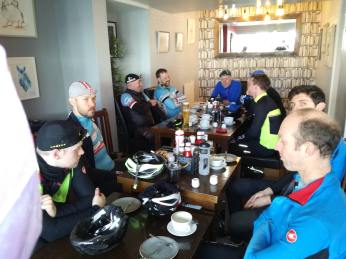 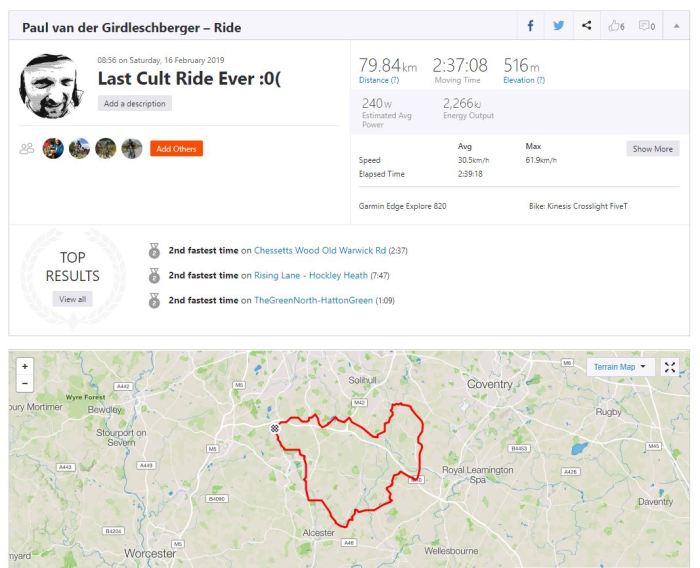