So I finally got it! My first new bike in a few years. My new commuting workhorse, gravel adventure bike and reliable touring steed. Its an all-rounder! I’ve already gone into great detail about it in my New Year. New Bike post back in January. It outlines my research and choice. It took some patience, a bit of chasing but ride aside (I haven’t ridden it yet), these are my first impressions on the customer journey with Ribble and the bike now I’ve dialed in my position on it.

So Ribble or Ribble Cycles as a company have been around for at least a couple of decades. I remember ordering from them back in the 90’s. You know, old skool mail order when you phoned them up and actually spoke to a real person! You said what you now click and type. How things change but given my online experience with Ribble, I’d argue talking to someone would have been far more efficient this time.

Ribble were ‘acquired’ recently. I’d imagine that means an injection of cash, a bit of structure and order being employed by their new CEO Andy Smallwood (ex-Boardman Bikes) which, one of the outcomes, has been a bit of a rebranding, including a funky, yet practical new website. I have to admit to being a bit snobbish about Ribble for a number of years fuelled by a bit of bad service way back. I’d ordered an expensive deep-section front wheel which should have had valve extenders included. I called, they told me they would send some but a couple of calls later with, still no extenders I was essentially called a liar and told to do one. I found that reputation was bounced around cycling forums for sometime and it coloured my judgement. They lost my business for years but they garnered my attention recently with their Pro team and their bikes and performances. Doing what a Pro team should do I guess? get my attention. A semi-interested peek at their bikes online with the ability to play with the bike builder function and I was hooked. Initially though, I was careful not to show too much admiration of them with my peers in case I was sneered at for even considering them lol. Careful questioning, what my mates thought, confirmed I didn’t have to be that snob anymore. Ribble bikes are decent.

Ordering my bike was easy. As it should be. Ribble keep it simple. Two colours, uncomplicated groupset choices, a price, you spec your bar width, crank length, cassette ratio etc + add any upgrades you need. Checkout and pay. Payment, for me, was via Cycle2Work and this is where something relatively simple became not so.

I’d read and re-read what I needed to do. Place the order. Use the payment method – Other Cycle to Work Schemes. Email my Letter of Collection (LoC). That should have been it. It wasn’t. I got my order and I got an email saying my LoC had been forwarded to their accounts dept. Almost a week went by. Nothing. I chased. No reply. I chased again. I was told they will give Accounts a ‘nudge’ for me. I got an email confirming my order had been released as I didn’t have to pay any extra. That annoyed me. Its pretty obvious if the LoC matches the order total! Then I got an email telling me they had not received my cyclescheme certificate. 1. They had it. 2. They had confirmed they had it. 3. Its Cycle2Work NOT Cyclescheme. I queried why I’d been sent that email and the reply was ‘Cyclescheme’ is a generic industry term for Cycle to Work blah blah blah. errrr…..no. Cyclescheme is the name of the UK’s largest scheme operator and I’m not using them ffs. Eventually I had my order confirmed. I was aware of an extended lead time which was fine until I got another email chasing me for my Cyclescheme certificate again! More chasing and my faith in continuing with the order was beginning to seep away. I stuck with it only because the Cube alternative I’d looked at was sold out, so they almost lost a sale. Eventually though, build confirmation was sent. An online check confirmed the bike was being picked. I was then sent further updates confirming the build, PDI and shipping were complete and to expect a call from the Birmingham Showroom when it was ready to collect. As promised I received said email confirming it was ready and I went yesterday to pick it up. No hassle, a helpful assistant just took my name and wheeled it out. I was offered some adjustments and pedals fitted but I politely declined as I wanted to set it up and check it myself.

I give Ribble Customer Service 5/10 – significant room for improvement

Having got the bike home now and dialled in my position, I’m very happy with it. My initial impressions are very positive. I love the fact its a complete groupset. I hate manufacturers that quote, say a 105 groupset, but put an FSA chainset on it. That mix and match approach to get to a price point grates on me. Its also clear the bike builder  who assembled my bike, gives a shit. Its a tiny detail but when you fit tyres and the logos line up with the tyre valves front and back, that’s attention to detail. The tyre clearance is massive. My 28mm’s on it look like 23’s. I may have to consider a 650b wheelset and 2.1 tyres now just to try it.

I nailed the geometry. The frame is about 5mm longer than my Kinesis but has a significantly taller head tube. 150mm as opposed to 110mm. Ideally I needed a 135/140mm, and I knew the 150mm would mean my bars would be about 10mm higher than they currently are but I dropped my Kinesis bars by 10mm recently anyway after riding it for years as it was. The key measurement was my reach. I take a fixed point, horizontal measurement from the centre of the seat tube to the centre of the bars or the gap between the faceplate and stem. My calculations meant I specced a 100mm. The higher head tube, sloping backwards, as it does, would take into account the fractionally longer frame. I was spot on.

The guard mounting points are slightly different from my Kinesis. Vertical bolts on the underside of the fork and rear bridge make the brackets I have redundant. Its a far cleaner approach and it will make it look far neater too. The flat mount brakes don’t make my rear carrier redundant either. I thought I may need a disc-compatible one but the flat-mount brakes enable ample clearance for a standard pannier rack. Other nuances I see are bottle cage bosses on the underside of the down tube and a forward facing seat clamp which make the bike look nice and clean from the back. The ‘Level’ branded finishing kit is consistent throughout the bike (bars, stem, seatpost, seat clamp, front mech hanger, fork steerer cap, lockrings, headset top cap) too which finishes it off nicely. I was originally attracted to the bike because of the gumwall tyres its shown with on the website but I have to say the black rim, black tyre combo is a good look and keeps the theme of black with the finishing kit, consistent thoughout. Simple and clean. I like it a lot.

The predominantly day-glo orange, I hope will act as a bit of automatic hi-viz when out on the road too

Nothing is perfect though so these are a few niggles that I don’t blame Ribble for. The 50T chainring has to go. Its too big for me. I ride a 46 on all my bikes but trying to find something that will fit is difficult as the R7000 rings are shaped specifically for the chainset now and there is no such thing as an R7000 46T chainring. I can go for a black Ultegra R8000 46T @ approx £85 or go all in and get an Absolute Black 46/30 combo for £167. My preference are the latter but I’ll need to sell my Kinesis first. I’ve checked all of my bolts and all the rack mount and bottle cage bolts were pretty loose. Probably so the paint isn’t accidentally cracked which is a symptom of tightening bolts directly onto newish paint.

All I have to do now is fit my guards, get my 30mm of excess steerer that now stands erect above my stem lopped off and I’m ready to go.

too much steerer. It has to go!

Even the rotor lockring is Level branded 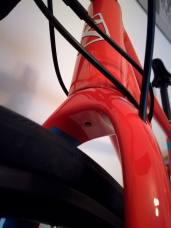 better than an ugly guard bracket 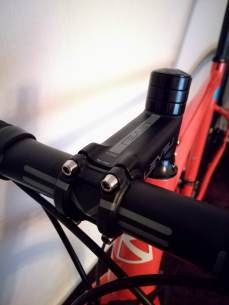 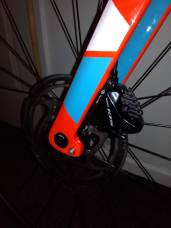 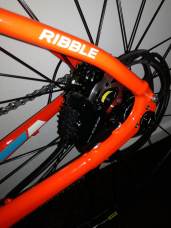 the internal routing is neat 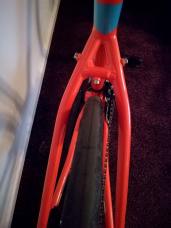 the builder gives a shit