It seems a shame such a nice bike has to be weighed down and cluttered up with essentials for commuting.

I managed to use the guards of my Kinesis. They required a couple of holes drilled through the top so they could fit the nice, clean, ‘no bracket’ approach Ribble have gone for on the CGR. Its a great idea. The front sits snugly around the front wheel but the back gives you an idea of the massive clearance available on this bike. It will do 40c tyres with guards. 47c without. Pretty good. 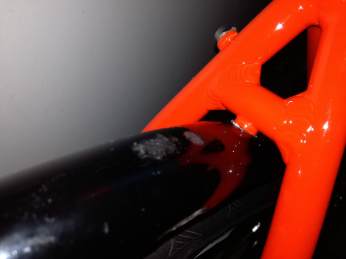 Other accessories fitted. Saddlebag and bottle cage. I don’t normally use a bottle to commute, its saves a lot of weight but as I build to Chase the Sun, I’ll be getting in extra miles after work so a cage (I have another spare in case I want two) is needed. I use a rear light year round. So on that goes and rather than fix my Garmin directly onto the stem, I’ve gone for an out-front mount so I can test a power bank which I’ll need at Chase the Sun to keep it going for 12-14hrs.

The only thing missing is my front light but I won’t need these for long as the clocks go back next month and I can ditch them.

Look out for my first ride report from Wales later this week. Do I ride The Colwyd on it though?