I decided to take a look today to see if it was any good and…..like every expansion I’ve experienced since becoming a subscriber, its impressive. Zwift has garnered some criticism by making the last few expansions too lumpy for some. This time, the fat lads at the back have been pampered with a super-fast, basically flat route through the desert.

Tick Tock is a clockwise loop through the new expansion book ended by Redwood forests and the familiar tunnels on the existing Watopia Flat route.

You start just before some new start pens which have been added. After agently downhill start you ride under an impressive iron bridge perched up above which looks odd as it doesn’t seem to carry anything. For future expansions maybe?

After swooping gently down a slight decline after a effortless 1-2% climb you come to the the first road split which offers up a large roundabout type turn.

You continue to meander through impressive desert landscapes with cactus and boulders straight out of a cowboys and indians movie before you hit a small desert town that resonates to the sound of a steam train rolling past you on the left as it disappears into a tunnel.

Out of town and you ride into a beautiful oasis showcasing waterfalls and your first spot of greenery which is refreshing after the relentless sandy landscape. Out of town is through what looks like a water-formed tunnel bored through rock and back into the desert but this time its peppered with colourful flowers on the outskirts of Saddle Springs. Its an odd looking place, like something trying to be futuristic from the 1950’s and 60’s. Here another turn offers up options for TT races and workouts. A gentle 2% climb up into the Redwood forest again sees a right turn blocked and will likely be available shortly. The maps shows its a shortcut across to the start pens. A nice descent through the trees and across a new bridge opens up a vista across the whole of Watopia and joins the established Watopia Flat route at the foot of the Epic KOM. A right turn and you ride through familiar tunnels under water before you climb out towards Downtown and take a new right back to the Desert start pens.

Its a great addition to Zwift. It will spread out the riders at peak times on their most popular course and offers up a number of additional route combinations for races, fondos etc. 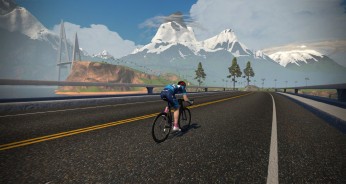 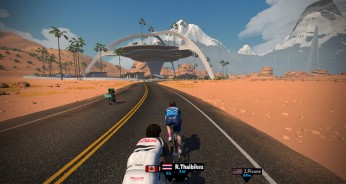 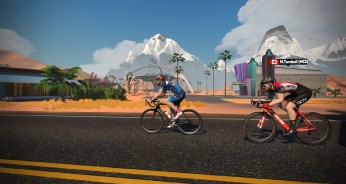 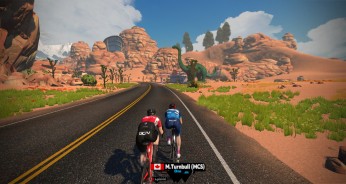 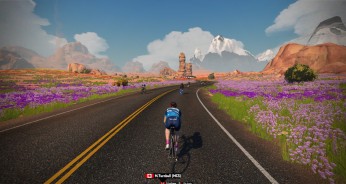 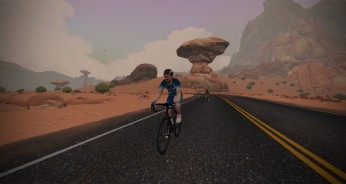