It was a long day yesterday travelling, unpacking and then going out for some food, beer and music last night. I was probably up 18hrs and it was telling when I woke this morning. A bit groggy from such a long day compounded with an extra beer or two I probably should have passed on.

Anyway I decided to get out on the bike for a quick spin to loosen the legs. Just 25km of gravel and roads I know. Out the door at 9.45 am. The sun was out, it was already 20 degs with only a bit of wind. As I rode off I changed gear and nothing happened, another click, nothing then the rear mech moved after about 4 clicks of my shifter. I had somehow pulled the rear mech cable in transit so my first job was to fix that. A quick undo of the cable, pull it tight and tighten back up. I got the tension spot on, didn’t need to adjust it. Sweet and off I went. 200m up the road, had to stop again and adjust my saddle height 5mm. (5mm is a lot so my girlfriend tells me lol) Off again and 100m later I was on the gravel, destination El Majanicho along the coast road. Its a well used road so although free of big rocks, constant use by cars creates those really annoying rumble-strip like surfaces. Luckily, for the most part, you can ride right on the outside and avoid them. Its pretty flat. It has some undulations but nothing testing. My tyres were a little lower on pressure than I normally like. It felt like riding on balloons at times so I was conscious not to bottom them out. 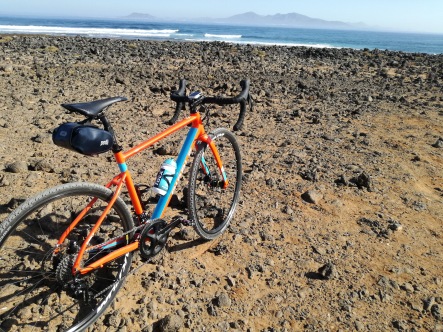 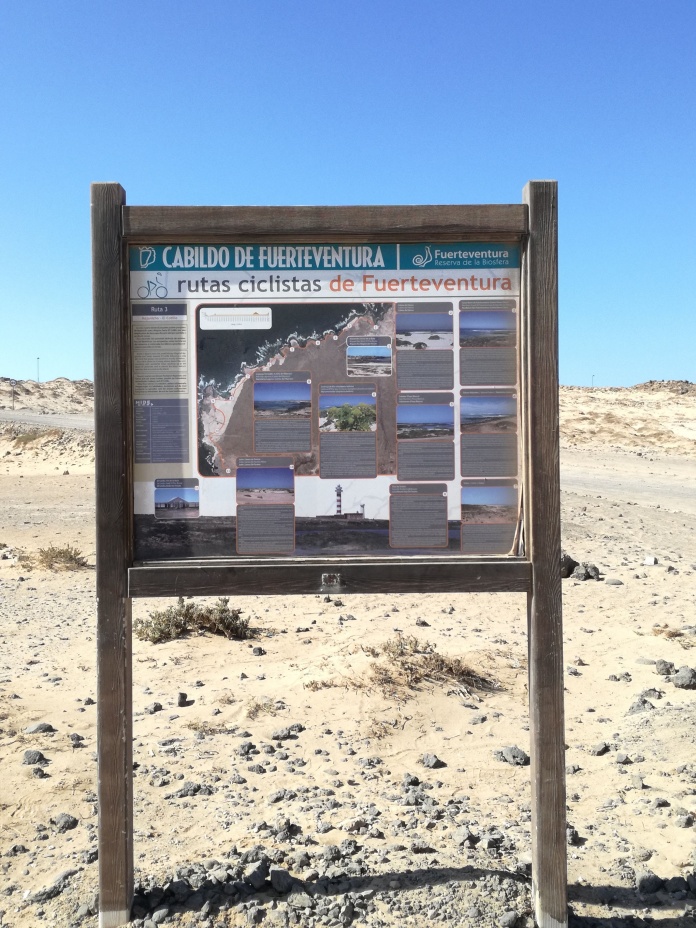 Its a designated cycle route and carries on along the coast to El Cotillo for another 14km which I’ll probably do later on in the holiday but for now it was just a leg loosner. Part 2 of the ride was to turn South once I got to El Majanicho and head towards Lajares. The tarmac here was new and felt like riding on carpet. If only all roads could be this good.

Just before Lajares, past the Camel Parking – yes, camels are parked and there is a sign that says so next to said camels! – it was a sharp left to begin Part 3 and the climb up and around the Hondo Volcano. Its dormant and has been extinct like all the volcanoes on Fuerteventura, for about 5000 years I think.

Camels are available for rides up into the Volcano

Initially the track is wide, good and the gradient is quite shallow. I’m glad I got here early as it can get busy with walkers. I’m not even sure if cycling on it is allowed but there are no signs that say otherwise.

The climb gradually gets steeper and the track deteriorates a bit and can be hard going in places as you sink in pea-like gravel. Near the top its quite a test and required my first gear (34×32) to navigate the broken track.

Then you hit a path. A very narrow path thats man made. Its what I can only describe as volcanic crazy-paving. Passable on an MTB just, absolutely horrendous on 700c wheels. It was like trying to ride over boulders. I’d forgotten how bad it was. I passed a couple who kindly stepped off the path for me and looked shocked when they saw me. Luckily it was only a few hundred metres long. I won’t be riding that again.

Rattled to death I got back on the gravel and I was on a wide, sweeping gravel road. Initially a fast downhill which was into a welcome, warm headwind. A couple of km on and nearly home the track goes through a series of steep dips and turns before you get to Volcano Bayuyo, another one. Just off the main track, you can normally see and feed chipmunks here but there were none today so I decided to take a dramatic pic of my bike with the crater in the back ground 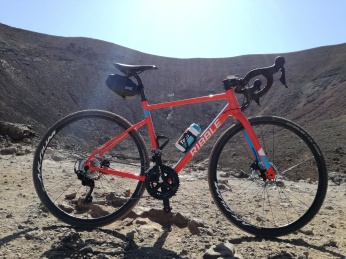 All downhill now back into Corralejo. I opted to ride back in through town and found a massive chunk of the high street had been pedestrianised. No cars allowed. So much nicer place to walk and cycle now but thats for another day.