I’ve done only three Zwift races since the start of March. It was really cold outside today so I decided to do some intensity indoors for a change so I didn’t have to put on all my winter clobber again. I’ve been riding my gravel bike everywhere since lockdown and I’ve become a kind of turbo diesel rather than the race car you get from regular racing. The fitness is there the sharpness not so. Time to to test it out.

So tonight, rather than get a kicking with my team mates in the TFC Monday Madness race I opted for a pan flat two lapper in the desert. Ease myself in I thought. Pfffffff!

There was a decent number in the pen and as soon as we started it was balls out up the drag on the lead in. FFS, was it always this fast? Through the start/finish and the pace was pretty hot. Riders taking turns rolling through in the 5’s and 6’s. One or two surged with a particularly hard one through the oasis first time up the slight drag which stretched a lined out group. My graph was seeing a LOT of red spikes which hurt. WTF was going on?

At the turn another big surge and I thought I was spent. I was one more big one away from blowing I think. Legs said no, head said just keep pedalling. The mini intervals and constant changes of pace were killing me. I was definitely ring rusty. The pace stayed really high and then on lap 2 it eased for a bit, just enough to get some kind of rest. I can do this.

At the turn for home I was just hanging on trying to surf the group. As we neared the finish I kind of felt a second wind but as the group wound up in the closing couple of kilometres I knew I was done. I hung on, tried to sprint and then go again but there wasn’t much left. I rolled in 16th. Fucked and happy I got through it.

Conclusion. Fit but not race fit. 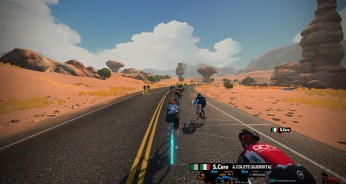